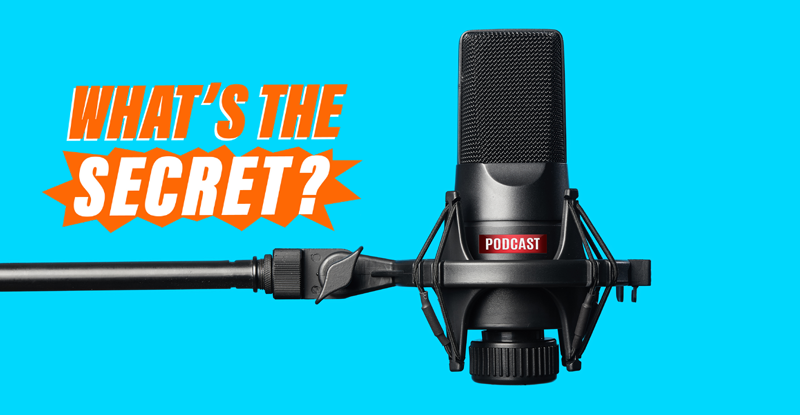 Six Things I’ve Learned In Six Months as Host of “What’s The Secret?”

Let’s start with the obvious: if you could overhear conversations between successful people in business, would you eavesdrop?

When you strip away the marketing, branding and buzz, that’s what podcasts do. Interviews are a collision of two (or more) high-performance minds, discussing and figuring out some aspect of the journey we’re all on. The difference is the discussion is open for public consumption.

While marketing is my strong suit in business, I felt like a novice to podcasts. Holding an audience through expert interviews isn’t the same as direct mail or social media management.

But I got started, and kept going. I surrounded myself with smart people who helped me build a unique brand for a show. I gave myself six months to experiment and ease my way in.

I didn’t worry about having the right equipment, or “making a splash” right away. Podcasts are a forgiving art form. You can start right away, with very little investment, and practice for as long as you want. Nobody will notice, until you aggressively promote it.

You can help me aggressively promote my show, however, by subscribing here.

Don’t get all hot and bothered if you prefer video interviews, or publishing articles online. Both are excellent mediums for doing the same thing I’m doing. I like both formats myself.

Podcasts, however, do something those other two formats don’t:

My central message is the truth about being in business online. You can imagine how boring that would be to watch on video, right?

I’d get bored filming it! “Ohhhh snap, there’s Gaddis, putting stamps on envelopes and tapping away on his keyboard!” That’s not what I’d call “visually engaging content.”

Plenty of slick marketers with rented Lambos and filtered beachfront photos get engagement, however. They encourage people to start the laptop lifestyle, and the audience buys right into it.  The message is smooth, seductive … and totally bogus.

That’s not how I roll.

Written content can be timeless, but much less so than a good, audible conversation between entrepreneurs. Most people relate better to banter, wisdom and emotion from human voices, even if it’s a little dated, versus the one-dimensional black-and-white of print.

My mission is to help people approach business online with a sober mind. So my message needs a beeline to their intellectual side. I don’t want them caught up in phony imagery, or lost in a sea of words. That’s why a podcast is such a powerful vehicle.

Listen to some powerful vehicle episodes on my podcast, available here.

The Six Things I’ve Learned In Six Months of Podcasting

Podcasting is like starting a business – the sooner you do it, the sooner you can succeed at it. It might take you awhile to figure out what the audience wants to hear … but it’ll take even longer if you wait until you know what that is.

Some people aren’t aware – you can spend less than $100 on Amazon to get a brand-new podcast kit with an excellent dynamic microphone. Yes, if you’re appearing on a huge show, you’ll probably want a good setup. But for starters, keep it simple and inexpensive.

It’ll take a while before you’re “magic on the mic,” and that’s okay. Not all audience members become raving fans, and some take a while to catch on. That’s okay too.

Far more important is that your episodes release on a very consistent, predictable pace. If you have a weekly episode that airs at the same time on the same day, your subscribers get used to it. Whenever they’re ready to go deeper into your world, they won’t have to search far.

Launching a podcast is similar to launching a product or service in many respects. One thing I noticed, as we prepared to launch, was that we followed the same general outline I teach in The M.I.L.K. It Method – Market, Idea, Launch, Ka’Ching.

To put it simply, you identify a niche audience you’re qualified to serve. You come up with a show concept and title that appeals to them. You launch it. Then you reap the rewards, usually in the form of monetization.

Hosting my show gives me incredible access to people I’d otherwise never get to meet. Recently, I started an SGPT Navy SEAL workout program, and connected with the creator of the course. I asked him if he’d be willing to appear on “What’s The Secret?”, and he agreed.

When I called to schedule the interview, he was in the middle of a 350-mile bike ride, and promised me he’d get back to me as soon as possible. It was one of the most unusual booking calls I ever made.

Turning your podcast into a profit center sounds like too much fun, doesn’t it? Of course. Because, just like anything else in the digital world, it *looks* like all you have to do is put it out there, and people will line up with their credit cards.

The truth is a little more complicated. Like you would with farming, you can “till the soil” of your podcast and work toward the day when people make purchasing decisions based mainly on what they hear when they listen to your show. But it takes time, effort and adaptation.

You can also monetize guests, as much or more than the audience. When Brian Kurtz joined the show, I had no idea it would lead to a joint venture to re-launch his book, Overdeliver. I thought he just wanted to have an interview.

As we begin to raise the bar on “What’s The Secret?”, I hope you’ll join us. Follow the link below to subscribe, so you don’t miss anything.