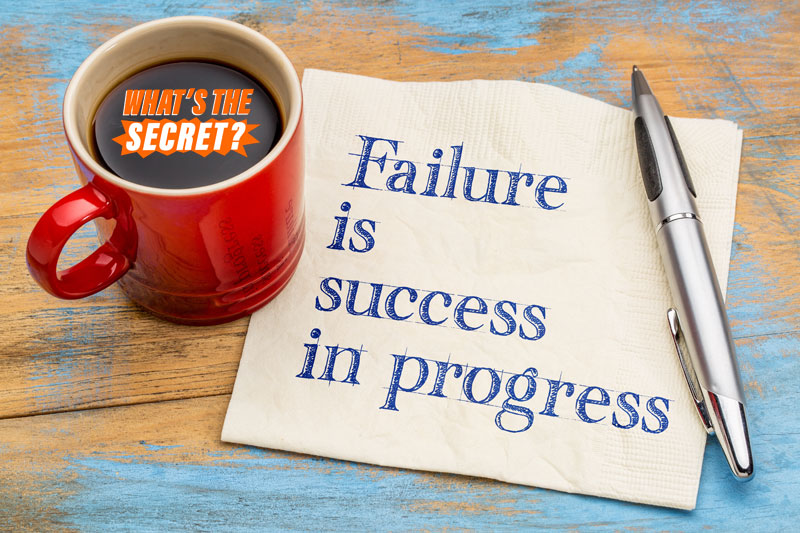 There’s a phrase I hear tossed around in the entrepreneurship and self-improvement world. It often comes up when somebody begins winning in their online business for the first time, kind of as a way to curb their enthusiasm and help them think clearly. It goes, “Never let success go to your head.”

Put differently, don’t get prideful and hoity-toity because you’re seeing some success in your life. That’s a fast way to make poor professional and relational decisions. I personally think that’s fantastic advice, but it should also apply to failure.

Though failure is bound to happen, we can easily internalize it, let it change what we believe about ourselves, and our future prospects at success. In this case, failure stops being something that happened, and becomes who we are.

Some people also react to failure by rejecting it, plugging their ears, and claiming that it was all someone else’s fault. In this case, they fail to learn from the situation, dooming themselves to repeating the mistake. In this case, I would argue that their failure is still living rent-free in their head.

Why We Need Failure

I recently worked with someone who runs a new startup less than a year old. He told me that the company is seeing some success in their first year, but they aren’t making the kind of progress the CEO wants to yet. They need to continue to develop their product to appeal to more customers.

What was the solution for him? He told me, “We need to fail faster.”

I thought that was a novel concept. He explained that if he and his product fail faster, then they’ll learn faster. They’ll figure out the solutions to their problems, have the grit they need for the next challenge, and come out with a better product on the other side.

Failure helps us learn. There are plenty of things I wouldn’t know about myself or business if I’d never been fired from my old job. It also keeps us humble, if we let it. While athletes often say “I’m humbled” when they are up on the podium receiving an award… the real humbling comes when they finish dead last.

Finally, failure is a fantastic generation machine. Learning the “why” and “how” behind each failure often leads to a “Eureka” that you just can’t get otherwise.

If this is making sense, then check out my podcast episode about the same topic.

How To Not Let Failure Get to Your Head

Here are three tactics to use the next time you fail, to get the most out of it.

Don’t try to forget your failure as soon as possible. Write it down. This helps you recognize what happened, and review it from an objective point of view.

It also helps you get your feelings about the failure out on paper. If you don’t take the time to feel the sting of defeat, then you might find yourself exploding during some seemingly unrelated moment.

It’s also helpful to look back on your journal from the months and years past. This gives you valuable perspective and even helps you see lessons that you didn’t in the moment.

When self-improvement gurus talk about reverse-engineering, they usually speak in terms of the future. You want to “start with the end in mind,” a la Stephen Covey. You choose where you want to be in the future, and then reverse-engineer the steps to get there.

However, you can also reverse engineer your failures. Though you may not know the way forward yet, you can still usually see WHY you failed. When you go through this process, you can deconstruct the issue and look at it from multiple points of view.

They say “hindsight is 20/20,” and by reverse engineering your failures, you can put that hindsight to work.

No, you didn’t read that wrong. You should celebrate your failures, especially the bigger ones. The next time something doesn’t go your way, throw a party. Buy yourself some flowers. Or your favorite candy bar.

When you celebrate your failures, you gain immunity to the fear of failing again. It helps you persist for the long haul. This is because you’re hijacking the reward center of your brain and retraining your outlook on failure. After all, if it keeps you humble, gives you perspective, and teaches you how to succeed, then it’s worth celebrating.

I met a counselor who works with a lot of high-performing students who can’t let go of their perfectionism. This obviously hurts them in school and life. He tells them, “When you get your first B, throw yourself a party.” I love that point of view. The only real failure is failing to grow from the experience.

If you’re ready to get back on your feet and try something new after a failure, then check out my FREE e-guide called the M.I.L.K. It Method. With this strategy, you can get your next win.